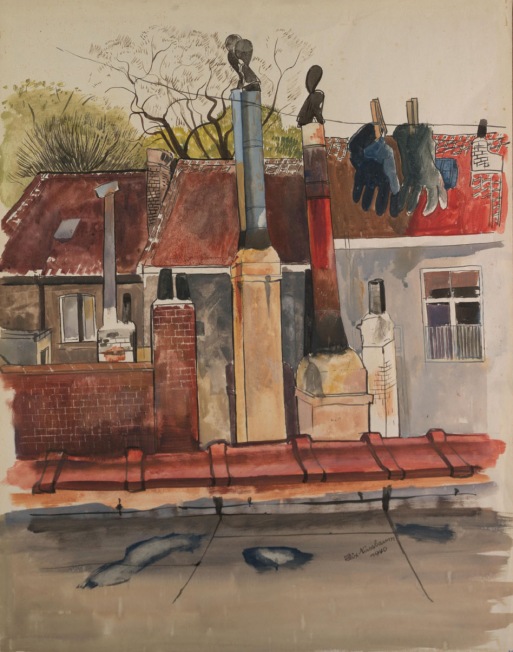 The Jewish artist Felix Nussbaum was born in 1904 in Germany to Philip Nussbaum, a proud German patriot, and his wife Rahel. He received a prestigious scholarship for the Villa Massimo, an extension of the Berlin Academy of the Arts in Rome, where he studied with a small group of German students from October 1932 until April 1933. Nussbaum left the programme after the students were visited by Hitler’s Propaganda Minister, Joseph Goebbels, who lectured them on the Nazi’s view of art and the confines of this doctrine to the main themes of promoting heroism and the “Aryan race”. He did not see it possible for a Jew and an artist like himself to remain there. His studio in Berlin, Germany had been set on fire because of his Jewish identity, and some 150 works fell victim to the flames.

During the beginning of National-Socialists rule in Germany, he and his wife lived in exile in Italy, France and from 1937 onwards in Brussels. In circa 1939, near the beginning of the Second World War, he drew ‘The Great Disaster’, which is seen as a visionary depiction of the demise of Europe. In this black and white painting, Nussbaum depicted several intriguing persons against a backdrop of destroyed buildings. In the lower left corner a man is crying out, much like Edvard Munk’s ‘The Scream’, from the horror of the scene behind him, but he covers his mouth with his hand as to hold in his overwhelming angst. In the middle of the scene, Nussbaum depicted a man resembling a rabbi with a prayer shawl, who looks up into the sky with a gesture of despair. In front of the rabbi is a naked woman in a semi-recumbent position, who might be a visualisation of Synagoga, the personification of the Jewish Synagogue. On the right-hand side, a damaged arch symbolises the broken Covenant between God and his Chosen people. Although the imagery Nussbaum used in this painting is very specific, it is hard not to look at this painting and think of images of the recently destructed cities in the Middle East.

Two days after German troops march into Belgium in May 1940 Nussbaum was arrested by Belgian authorities and got deported to the detention camp Saint-Cyprien in the south of France. He asked to be returned to Germany and managed to escape on the way. He returned to his wife in Brussels and they both went into hiding with the help of a befriended art dealer. During his time in hiding, Nussbaum was able to work in his studio on Rue Archimède. As he is now unable to move freely within Europe or even within the city, these paintings often show views of the rooftops, chimneys, and branches of treetops, which he can see from the studio. Above the Roofs, 1940 More importantly, he processes the Holocaust through his artistic work, in a way that hardly any other artist of his generation did. During this life-threatening and hopeless time in hiding, painting became an outlet and an act of resistance for him. With the creation of over 450 works, he retained his human dignity and the right to self-determination. One of the paintings he drew during this time depicts a make-shift synagogue from the Saint Cyprien concentration camp, located in the French Pyrenees, where Nussbaum was held as a prisoner. It shows a group of men wrapped in prayer shawls praying at a desolate shack. One man stands alone – possibly a depiction of the artist himself who, like many young Jewish people of his time, was ambivalent about his Jewish identity. Like many others who had been arrested for being Jewish, he honoured his Jewish heritage hesitantly. 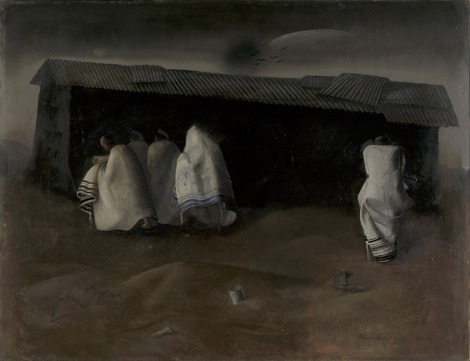 Nussbaum painted throughout this long period of flight from the Nazis until he was arrested with his wife by the Wehrmacht on June 20, 1944. They were got deported to Auschwitz, where Nussbaum died like most of his family members. While Nussbaum became known as one of the main representatives of New Objectivity, he powerfully illustrated a narrative of hopeless flight and the life of Jewish refugees, as well as their despair, anguish, and frustration. Many of his paintings concerned with his fate as a Jewish artist are connected by a common atmosphere of destruction, despair, and melancholy. His works were heavily influenced by the changing socio-political framework, and his concern for the Jewish people in Europe is evident throughout these works.