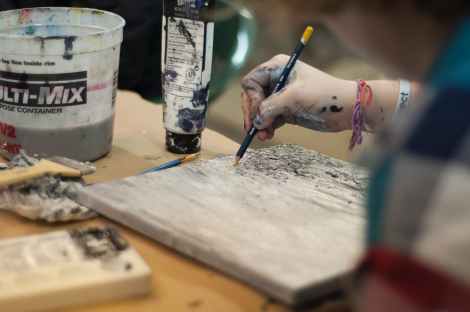 In an article by The Guardian earlier this month, several artists working across a range of mediums were asked what the biggest issue they faced was, reflecting on the conditions of the art world today. The overwhelming majority of responses came down to patronage and the issues of morality that surround achieving a living wage from working full-time as an artist. These issues, while thrown into a modern setting, are not new. Problems surrounding patronage and subject matter are something artists have long struggled with, with the Christian church being the only way for artists to truly make a living from the birth of the church in the early centuries CE. It was only with an increasing interest from private buyers with an interest in secular scenes and topics that artists had a chance to start exploring their own ideas. And yet even still, artists had to depend on set pieces that were perceived to be popular – primarily portraits, landscapes, and history paintings.

According to artists like Oreet Ashery, the issue is not just about trying to make money, but where that money comes from. If you are an artist interested in social issues, and the atrocities taking place all over the world at any one time, is it hypocritical for you to be involved in an exhibition sponsored, for example, by an oil company? Or is it better to be getting your work out there and attempting to shape discussion within, rather than not being visible at all? With museums and galleries depending so heavily on these big corporations – of often dubious moral standing – is there any scenario where it’s feasible to cut them out?

…the issue is not just about trying to make money, but where that money comes from.

Another problem that comes under the wider umbrella of patronage is that of censorship. If you are entirely dependent on patronage from an individual or company that is fundamentally conservative, how much are these views going to influence the kind of work produced by an artist? What kind of influence is this going to have on works chosen (and perhaps more importantly, not chosen) to be displayed in museums and galleries? These are public spaces, but even where they are state funded, there can still be shades of censorship depending on accepted societal norms and who is the head of collections.

Brazilian artist Rivane Neuenschwander worries about the strain put on the arts in her country, where both individual artists and institutions have come under enormous pressure from conservative politicians and other powerful groups. Stefan Kalmer, director of the Institute of Contemporary Arts (ICA) in London also considered this, focusing in particular on the unanswered question of how many galleries across America have Trump supporters as their biggest donors, sitting on their boards. While he doesn’t offer an alternative to this, he is at least willing to start a conversation about this inherent bias stating ‘at least we can talk about them, instead of pretending they’re not there’.

If you are entirely dependent on patronage from an individual or company that is fundamentally conservative, how much are these views going to influence the kind of work produced by an artist?

Visual artist Tacita Dean also confirmed outside influence as her biggest fear, but she offered the beginnings of a solution, stressing the importance of artists balancing what she saw as the need for the market with a detachment from it. But how can artists do just enough to keep donors happy, and as a result keep their funding going, without compromising their own creativity and point of view? There should be choices, not just one way to do things.

Art, at least according to the Oxford Dictionary definition, is “the expression or application of human creative skill and imagination…primarily for their beauty or emotional power”. In a world where artists rely on the support of others, Dean seems to have the right idea. When you can’t depend on the morality of corporations, and even your government could have an agenda, the only way forward seems to be having multiple ways of getting your work seen. If you can’t be forced down a particular path, then you can’t be forced into censorship or manipulation of your message – but can this be achieved?

It all comes down to being true to oneself and one’s artistic talent. Photographer Catherine Opie has called for artists to persevere at their work, even when things get hard, and to always be authentic. She thinks that the ultimate question facing artists is what type of artist they want to be, however, she doesn’t think it matters much what their answer to this is, as an artists work tends to live on in the context of political and contemporary culture even when their opinions do not match that of the consensus.

This can all perhaps be summed up in what Jeremy Deller gave as his response to The Guardian: ‘WTF? That’s the question facing artists today.’