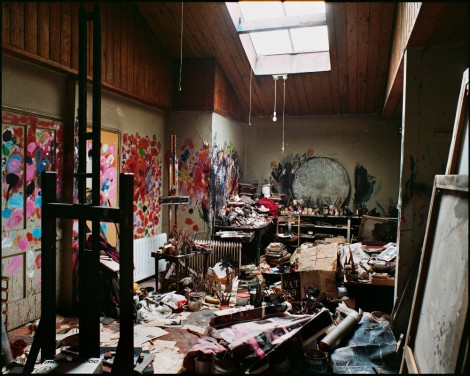 I guess what inspired me to visit the recreation of Francis Bacon’s London studio in the Hugh Lane Gallery, Dublin, was the idea that a room so intentionally chaotic could aid and improve the artistic process. It’s a romantic and interesting notion viewed in isolation, but is particularly so for someone like me, someone who takes a messy environment personally. The disorder of a room cuts through my brain like a hollow-point bullet and scrambles my ideas and emotions into one bloody mess. I’m inclined to psychoanalyse my environment and wonder if the makeup-smear-and-loose-tobacco mire which tends to accumulate in my room is some externalisation of inner turmoil. I feel compelled to scrub it away before I can get work done out of some fear that my sadness or stress is spreading over the walls like mould.

I enjoy galleries but in no way find them comforting. They’re heavy with silence and it makes me aware of every way that I make noise and ruin any place I enter with my personal cacophony — the zips puckering out of my swollen backpack jingle obnoxiously, my shoes squeak against the floor, and the folds of my coat rub against each other in what is probably a tiny rustling but rings in my ears like sandpaper.

The only thing that can be heard apart from the murmur of other patrons is the lion-cub roar of the humidifiers and dehumidifiers which constantly work in tandem to maintain the ideal humidity to preserve artwork in Ireland, 50%.

They occasionally need to be adjusted, I was told by security, to accommodate the changes in the air that come when concerts are held in the gallery; too many people are breathing, or the door swings open too many times. While no one could begrudge a gallery resorting to artifice to maintain its charges, it gives the distinct impression that these places would be better served if there were never any people in them. Any of the devices used to control the environment are employed to mitigate the depleting effect of human beings, so it seems.

Which is interesting, because Francis Bacon’s studio seemed to be a space to which Bacon was not suited and thus depleted him. The attachment was emotional rather than rational; the dust in the air aggravated his asthma, and the place was so small that it limited the amount of canvases Bacon could be working on at any given time. Bacon’s famous Triptych pieces could never at any point during their composition all be laid out next to each other. Despite this, Bacon said he knew he could work there from the moment he saw it, and for reasons he couldn’t articulate he enjoyed the mess. He went on to incorporate elements of decay into his work; he mixed his paint with sand or ash or the asthma-aggravating dust and studied medical textbooks and copied photos of skin disorders to paint his subjects. He admired hugely the works of photographer and friend Peter Beard, particularly a photoseries cataloging the death of 350,000 elephants in Kenya which included aerial photos of their carcassess embedded in parched soil. A print of a Beard photo of a dead zebra was discovered in Bacon’s studio by the team of archaeologists commissioned to catalogue and compile everything to be brought to the Hugh Lane. 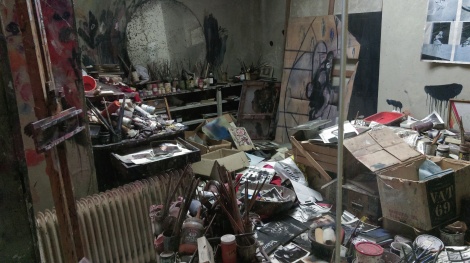 Recreation of his studio at the Hugh Lane Gallery, Dublin.

When viewing the studio in its glass-bound repose, you can step forward into a carved-out square which can only fit one person to get a closer look. I found my face hovering inches away from the glass, my humidity-ruining breath smoking it up as I tried to understand what gave the mess the nebulous internal order with which it is governed. It unfurls organically — the paint pots and turpentine-filled glasses and stained mugs and rags all tumble together and cascade like hair. According to Louis Le Brocquey in an interview on RTÉ Radio, Bacon did his best work when severely hungover, which could explain the constant mess. Personally, I tear through my bedroom like a tornado after a heavy night; I pull the entire contents of my wardrobe onto my floor hurriedly as I try to get ready for the class I’m probably late to, cursing the air and shoving paracetamol into my face like Skittles in total defiance of the recommended dosage.

I was looking too close to let the beauty just lie, however, and the more I fixated on the details the more I tortured myself with questions.

By the end of the day, Bacon’s coffee almost definitely got spiked with turpentine despite best attempts to segregate the two, and taking a swig and realising this may have poisoned his mood (just as it was, to some degree, his body) and may have affected his work. Can we understand the studio without these kind of details that can only be understood in action? Or take a trodden-upon paint-stained towel on the floor; it looked damp. Was it damp though? Was it damp when they found it and did they, for the sake of authenticity, keep the towel damp? Did the towel dry out in transit, meaning they had to re-dampen it? Does it dry out in the exhibit, forcing them to go in, carefully navigate the carefully placed chaos, and wet the towel? Does it, therefore, smell like damp towel behind the glass? Is that the original towel, or did the original towel succumb to mildew, meaning the people at the gallery had to remove the towel and replace it with an identically-coloured, identically-stained towel which they then had to dampen it to an identical level of dampness and place back in its exact position?

All I wanted was to have a nice afternoon in a gallery, and now I’m engaged in a Plutarch-esque self-imposed thought experiment about a towel.

Francis Bacon would have been vociferous in his objection to such an exhibit, and I guess I wonder whether the insight and education provided by the material outweighs the troubling fetishization of the artistic mind and the vestiges of their life abandoned in death. Similar disquiet can be felt when reading Dave Foster Wallace’s The Pale King, a work he left unfinished in the wake of his suicide. Wallace, ever the perfectionist, would most likely retch at the idea of an unpolished piece of writing being shown to the world. A painting by Walter Frederick Osbourne hangs also in the Hugh Lane, “Tea In the Garden”, and in its upper right corner one observes that the painting gradually fades to blank. This is because Osbourne died of pneumonia before its completion; and though what I’ve previously said may imply I think this perverse, there is something transfixing about it, how it fades away such as the artist did as his body succumbed to illness. It’s difficult to know what to think of us and how we display the gorgeous artefacts that surrounded the corpse of their creators.