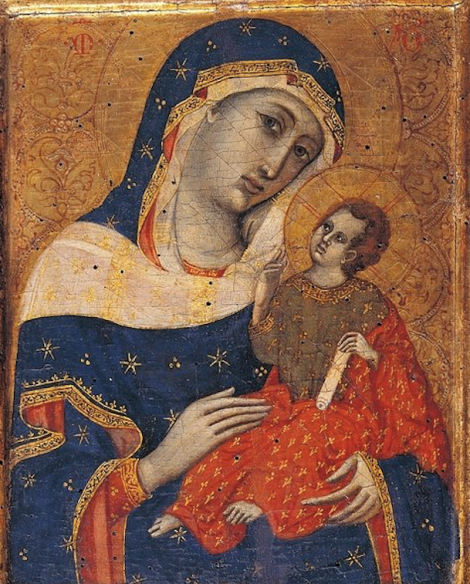 Babies aren’t inherently unpleasant looking beings. Sure, some might look a little wrinkly or bruised at first, but overall these little people are not known for their ugliness. Many would even go so far as to say babies are, on the whole, quite cute. Indeed, the babies we see represented throughout art tend to be docile little cherubs with big bugeyes and pinchable peachy cheeks. From the bouncing, robust tykes that populate Norman Rockwell scenes to the serene, to the oddly elegant infant Christs popular in the Renaissance, the trend of showing babies as idealised cupids seems ubiquitous. This was not always the case.

The infants found in the art of the medieval period do not match our idea of what a baby should appear to be. More often than not, medieval babies resemble middle aged men. Receding hairlines, five o’clock shadow, heavy eyebags and a seemingly infinite amount of wrinkles were all par for the course.

Had these artists seen a baby before? You may be forgiven in thinking that the artists usually responsible for these images had grown so accustomed to only seeing other adult males that they had forgotten what a child looked like. “It’s a normal person… but smaller, right?”

Some infants in medieval art go far beyond looking merely aged. Some are downright weird, sporting nauseous or vaguely obscene expressions and contorted, writhing poses. These babies have more in common with Regan MacNeil than the average cradle dweller. It can prove difficult for the modern viewer to reconcile their notion of what a baby should look like with what is presented before them.

It’s not that the artists of the medieval period didn’t know how to paint or draw. Indeed, their approach to depicting infants was both calculated and considered. It’s no accident that so many toddlers came to have stubble and a paunch. Medieval depictions of babies look the way they do to serve a specific set of purposes. Though these reasons were never explicitly stated or recorded by any one individual, they reflect the social and religious life of the medieval world on multiple levels. The belief in the Christian God as designer and creator of all things strongly influenced artistic practices throughout the era, especially from the twelfth century onwards. The work of the artist was believed to reflect the creative work of God, though infinitely less perfect by virtue of being created by a mortal. This is highlighted by images of God through manuscript illustration which portray Him as an artist using tools such as brushes and compasses to create the world. As such, many viewed it as blasphemous to attempt to create faithfully captured images of life in imitation of God. Furthermore, it was up to the artist to abstract their work somewhat in order to avoid breaking the fourth commandment which forbade the creation of “any image of what is in heaven above or on earth beneath”. In short, the babies were intentionally made to appear unnatural so as to avoid representing any actual living creature. I think we can all agree that the artists were successful in this. 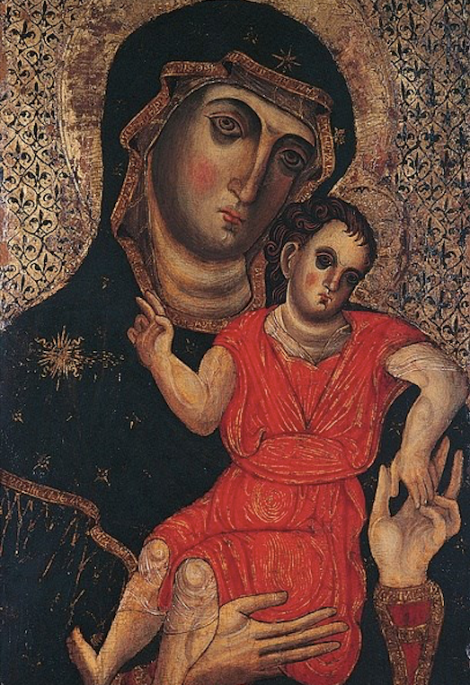 As with any era in art history, the subject of the image often informed the style in which it was portrayed. Medieval babies are no exception to this. Depictions of children in medieval art were usually confined to representing the infant Christ. This brought with it many, many ecclesiastical complications. Firstly, Scripture held that Jesus was born perfectly formed and unchanged. This posed some challenging issues for artists attempting to portray Christ in His infancy. Was He born a fully formed adult male or was He just a very handsome baby? The artists seem to have decided to meet somewhere in the middle and depict the Christ child as an extremely precociously developed infant. Furthermore, if Christ was perfect it would be impossible for any inherently fallible human artist to attempt to capture His appearance faithfully. As such, the ‘stylised’ approach which medieval artists took when representing the infant Christ was a means of showing his otherworldliness in a pictorial form. Indeed, the odd appearance of medieval depictions of infant Christs was viewed more as a mark of divinity than of earthly ugliness.

Stylistic preferences have diverged greatly since the medieval period. What was considered the stylistic norm in 1300 would now be broadly considered dated and antique. Indeed, the medieval aesthetics of expressive stylisation and ornamentation were already out of fashion with the rise of the classically-obsessed Renaissance. The prominence of naturalistic and illusionistic painting largely was not a feature of medieval art. Though some would say that this resulted from lack of technical ability, the truth was more complicated. There was no lack of technical ability in medieval art, as is obvious from the impressive attention to detail of the minute illustrations of manuscripts and the complex metalwork used at the altar.  As I have mentioned earlier, the majority of medieval artwork was concerned with heavenly subjects and therefore was intentionally non-naturalistic in treatment.

What appears ‘ugly’ to the modern eye may have appeared perfectly acceptable and even beautiful to the medieval viewer.

The babies which we have come to know and love for their monstrous appearances were most likely revered for the opposite reasons at the time of their creation. The bugeyes and wrinkles of medieval infants were a symbol not of a life on the drink, but of divine wisdom and beauty. The seemingly lecherous expressions and gestures they make towards the Madonnas they are so often pictured with were not considered obscene and bizarre, but warm and loving. To fully understand and appreciate the unique beauty of medieval babies requires a medieval outlook on life, society and beauty. As twenty-first century viewers, the veil of history can often obscure the context and nuances of art produced in the past. Though much valuable information and contemporary opinion is undoubtedly lost to time, it is still worthwhile to view medieval art in the context of the era in which it was made.

Whether loved or ridiculed by viewers today, the ugly babies of the medieval era have stood the test of time. The fact that they are still discussed today is a testament to this. For every dime-a-dozen, cutesy infant in art, there is a spectacularly grotesque medieval equivalent. The lolling, gigantic heads and oddly defined musculature are what draws the modern viewer in to these images and makes them memorable. The post-Renaissance concepts of the desirability of innocent, ‘sweet’ looking children and the importance of naturalism have coloured the modern view of how children should be represented significantly. However, if we free ourselves from these preconceived ideals and learn to view medieval art in its own right it suddenly becomes less bizarre. Aesthetic merit and even beauty can be found in these terrifying tots, even if they do resemble middle-aged men.