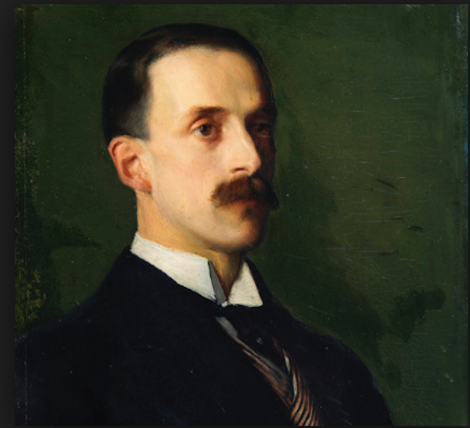 Bella White reviews Sir Hugh Lane (1875-1915): A Centenary Perspective on until 17th January 2016 at the National Gallery of Ireland.

Nestled in between At A Glance: Portraits by John Butler Yeats and Jackie Nickerson’s more contemporary painting and photography collection Uniform, is a commemorative exhibition on the life and work of Cork-born Sir Hugh Lane and his significant contribution to the visual arts in Ireland and the world at large. Although small, the exhibition does not evade particular areas of Lane’s life or artistic choices. Rather it offers a balanced, manageable representation of a man who, although known for accepting projects simply ‘for the public good’, was often viewed with suspicion. Nevertheless it is a celebration of his life and contribution to the Dublin and London art scenes, one hundred years after his tragic death on the RMS Lusitania.

Over the course of his life, Lane presented twenty-four paintings to the National Gallery of Ireland.

Lane was one of over 1000 people killed in the Lusitania’s sinking off the west coast of county Cork. He had, since 1914, been the Director of the National Gallery of Ireland. With a ‘self-acquired’ knowledge of art, he emerged as an independent picture dealer and restorer relatively quickly, perhaps thanks to his ‘sharp tongue’, ‘great single-mindedness’ and ‘good business acumen’ – as the exhibition suggests. By the age of only twenty-three, he was well established in the artistic sphere and went on to coordinate Irish exhibitions of both Old Master and contemporary work (1902-1904). In addition, one of his most famous, and controversial, feats was his ‘conditional gift’ of 39 French 19th century paintings to the Municipal Gallery of Modern Art, now situated in Parnell Square Dublin in 1908. In June 1909, Lane was knighted at the considerably young age of 33 for his service to the arts. He continued to support other artists and gained portrait commissions for John Butler Yeats, William Orpen and the controversial Antonio Mancini among others, all of whose work features in the exhibition. In fact, Mancini’s charcoal ‘Portrait of Sarah Cecilia Harrison’ is displayed, as well as Sarah Cecilia Harrison’s own portrait of Sir Hugh Lane himself.

In addition to assembling collections in Dublin, Lane was also heavily immersed in the contemporary art scene of South Africa, working with the Johannesburg Art Gallery and the Michaelis Collection of Dutch and Flemish paintings for Cape Town. Over the course of his life, Lane presented twenty-four paintings to the National Gallery of Ireland, where this exhibition of his work can now be found. Following his untimely death in 1915, forty-two Old Masters and British 18th century pictures were chosen from his Estate, together with a small number of bronze works.

What is most refreshing about this exhibition is the variety in the compositions displayed. Lane has collected a range of works from Gainsborough’s rustic ‘Landscape with Cattle’ (1767, oil on canvas) to Roderic O’Conor’s impressionist ‘A Quiet Read’ (1910). Tipperary-born Rose Barton’s watercolour on board of ‘The Garden of Lindsey House, London’ is in fact Lane’s own Chelsea home. It is not only the variety in the artistic medium that is striking but also the contrasting subject matters. The exquisite depiction of the bodice of Rembrandt’s ‘Portrait of a Lady Holding a Glove’ (1632-33) hangs alongside John Singer Sargent’s sombre ‘Portrait of Woodrow Wilson’ (1917) and the almost overwhelmingly bright, even child-like, depiction of ‘Mellifont Abbey’ (1940s) by Gerard Dillon.

The National Gallery have not only displayed the works bequest to them, but also additional details and objects relating to Lane’s life and the effect he had on the general public, such as his own Account Book (1902-15) and publications concerning him since his death. Relevant and insightful information on The Lane Fund is also presented. At the time of his death, Lane had bequeathed his Chelsea home, Lindsey House, and the Old Master pictures he owned, to the National Gallery of Ireland with the intention of creating a picture fund. The fund provides an astonishing £1000 to £3000 each year, and acquires many impressive works such as Perugino’s ‘The Lamentation of the Dead Christ’, whose lengthy conservation has just concluded, and now hangs in the central area of the exhibition.