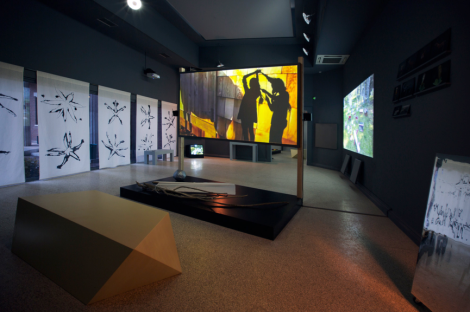 Ahead of the launch of ‘They Come To Us Without A Sound’ at NTU Centre for Contemporary Art Singapore, Tilly Dunne profiles the internationally acclaimed Joan Jonas.

Joan Jonas, born in 1936 in New York, began her artistic career as a sculptor and then progressed into performance art and films, in which she has become a pioneer.

In the late 1960’s she created a performance ‘Mirror Pieces’ in which performers moved across the stage carrying mirrors and slowly rotating. Influenced by Borges’ short story ‘The Garden of Forking Paths’ Jonas used the mirrors in her pieces as a device to change the image and the space, to alter the audience’s perception of the performance and make them part of it. Eradicating the fourth wall by including the audience in her performances became a theme Jonas has used ever since. These mirror pieces led her to be an innovator in performance art in the United States. It wasn’t until on a trip to Japan where she purchased a video camera that she introduced videos into her performances, allowing her to create an innovative visual language.

“The fact that the bee can make honey is a kind of miracle. Of course these bees are endangered. Climate is an enormous subject that none of us completely understand. But I think it’s on a lot of artists’ minds. I’m not the only one.”

‘They Come To Us Without A Sound’ first exhibited at the US pavilion at the 2015 Venice Biennale. It moves to Singapore in January 2016. In it Jonas addresses a world that is changing but she does not criticise or condemn it. One of Jonas’ sources is Haldor Laxness’ book ‘Under the Glacier’ written in the 1960s which refers to the honeybee’s process of taking pollen to the hive and then producing honey. Jonas is fascinated by this amazing colony of workers. She exploits and interprets this idea by having a video of the honeybees at work layered underneath children playing, showing the cycle of nature and life. The unity and diligence of the bees is a miracle of nature. Speaking about Laxness and the honeybee, Jonas remarked ‘the fact that the bee can make honey is a kind of miracle. Of course these bees are endangered. Climate is an enormous subject that none of us completely understand. But I think it’s on a lot of artists’ minds. I’m not the only one.’

For the first time in her career ‘They Come To Us Without A Sound’ uses children as performers. Their youthful innocence contrasts with the transience of nature and the futility of life. In her videos she combines the limited directions she gives her performers with their improvised spontaneity. She allows the noises and chaos of real life to influence and contribute to her videos.

Jonas designed freestanding rippled mirrors which were hand-crafted in Murano and are placed in each room of the exhibition in Venice alongside drawings, prints and objects related to the theme in that particular room.

The theme at the centre of the exhibition is the fragility of nature. She combines this theme with another, that of ghosts. Ghosts relate to memories of creatures that are becoming extinct and disappearing. Jonas’ exhibit celebrates nature and its fragility and layers it with this mystical theme.

The videos show readings of ghost stories, and performances of dances and skits by children. The children play with sticks and each other whilst wearing white masks or white paper hats layered in front of screens of videos of horses, fish and honeycombs. It is a very profound and moving piece, exploring the innocence of children and the beauty of nature.

The division of the pieces in different rooms, with an individual sub-theme for each room, creates a sense of unified fragmentation.

Jonas’ art does little by way of explaining her own view on the principal theme. Rather it simply wants the audience to experience her vision. She layers videos and audio – a video of children on a stage playing with sticks plays in front of a video of a honeycomb, whilst a recording of mystic chanting and ghost story recitals plays out.

Jonas creates her visual language through different mediums. Her combination of visual and audio engages the audience’s senses. The use of mirrors asks questions about the space and the audience’s participation, leaving a haunting but beautiful impact.

The division of the pieces in different rooms, with an individual sub-theme for each room, creates a sense of unified fragmentation. What joins all the individual pieces are the leitmotifs: masks, the natural world, mirrors and the mystical world.

Humorously Jonas’ own dog features in the piece. With a Go-Pro attached to his collar, he walks down a beach. The combination of upside down video shots (the dog’s collar keeps slipping) and the crunching sound of stepping on shells creates a charming discord.

Jonas’ beautifully interwoven audio and visuals engage the audience on both a sensual and emotive level. Her meticulous and innovative work is sure to stun audiences in Singapore when it exhibits there in January.