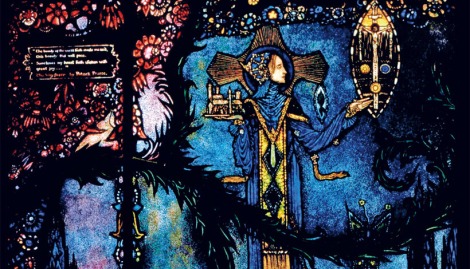 Historically, stained glass is associated with religious art, most famously with Chartres Cathedral. The light illuminating these church windows would have been related to the light of God, reinforcing the religious imagery and symbolism of the medium. However, stained glass is a fine decorative art and has also been used in a secular context. Traditionally laid out in panels, stained glass has great narrative potential and as such can be used to illustrate literary sources. Other artists have used stained glass to illustrate patriotic themes, or for purely decorative functions. In the work of modern and contemporary artists, stained glass has moved away from figurative imagery to show abstraction, and focus on materiality. Irish artists working in the medium of stained glass in the twentieth and twenty-first centuries have created many interesting works in a secular context thus showing the potential of stained glass outside the church.

Harry Clarke (1889-1931) is arguably Ireland’s greatest exponent of stained glass. His windows are in churches around the country, but he also dealt with literary subjects – as a stained glass artist and an illustrator. His last major project, The Geneva Window (1927) is currently in Florida. This window was commissioned to celebrate Irish writers, but controversy surrounding the imagery led the Irish government to reject the window on the grounds that it ‘would give grave offence to many of our people.’ However, some of Clarke’s secular stained glass can be seen in Dublin.  The Dublin City Gallery (The Hugh Lane) houses The Eve of St Agnes (1924). This pair of windows illustrates a John Keats poem. The windows are divided into panels with stunningly intricate work in Clarke’s eerie style. Clarke’s technique was meticulous, he used a needle to achieve this fine level of detail. The jewel-like colours are typical of his work, with a rich blue being particularly prominent. The text of the poem is included, in tiny lettering. Clarke’s grisaille borders between the panels cleverly conceal much of the leading in the window.

Clarke’s windows for the Bewley’s Oriental Café date to 1926. There are six windows, four illustrate classical orders (Ionic, Doric, Tuscan and Corinthian) and the other two windows are decorative, with patterns of flowers and vines. The windows showing the architectural orders have a column topped with an urn of flowers, framed with beading, compositions of flowers, vines and birds, and finally intricate silhouetted designs. Flowers twist around the shaft of the column, cleverly concealing the lead work.

Evie Hone (1894-1955) is another Irish stained glass artist of note. While much of her work (both paintings and stained glass) was religious, one of her secular works can be seen in the Irish government buildings. Hone’s Cubist idiom provides a striking contrast to Clarke’s Gothic style. Commissioned in 1939 for the World Trade Fair in New York, My Four Green Fields shows symbols of the four provinces in Ireland. It is an example of how stained glass can portray patriotic messages. It is often in the backgrounds of Hone’s windows that her Cubist tendencies can be seen. This window has a brightly coloured background, which gives a lively patchwork effect. Hone was involved in An Túr Gloine (The Glass Tower), a stained glass enterprise founded by artist Sarah Purser, which ran from 1903 to 1944 and promoted Irish stained glass.

Stained glass continues to be a medium used in contemporary Irish art. Peadar Lamb’s windows in the National Maritime Museum entitled The Dún Laoghaire diptych (2010-11) are an example of this. This work engages with Irish history – featuring an image of a High King, and a boat that resembles that found in the Broighter Hoard. Another work, for the Office of Public Works, entitled Dublin Zoo (2008) features a tiger, elephants, a peacock and monkeys . This subject is markedly different from the traditional ideas of stained glass windows, and shows the decorative potential of the medium. Lamb’s simplistic style is effective and sometimes quirky. His bright use of colour and bold, figurative style creates visually appealing windows.

Maud Cotter is a contemporary artist whose work with stained glass has been highly innovative. Nicola Gordon Bowe speaks of Cotter’s ‘painterly energy and adventurous forms.’ Cotter used stained glass early in her career, and now focuses on installations. Her stained glass works tend to be freestanding, rather than in the traditional window format. One such work is Straight as Lemons Meet Fish, which has a pyramid form. The vibrant colours and flowing forms of this work are distinctive, and its form shows different possibilities for the stained glass medium. The viewer can circle the work, which does not have the narrative or defined layout typically associated with the medium. Cotter’s work is energetic and expressive, she enlivens the surface of the glass. The materiality of her work is important to Cotter who links transparency to ideas of the self and the body.

These four artists are but a few of those working in stained glass throughout the history of Irish art. While many dazzling examples of Irish stained glass are to be seen in churches around the country, it is important to consider works in other contexts too. It is interesting to consider how stained glass functions in contemporary art, which tends not to be outside a religious context. The work of artists like Maud Cotter shows the potential of the medium, and how it can be removed from its traditional format and usage to create something exciting that is symbolic in its own way.