In a interview with young Dublin artists, Olen Bajarias speaks to Steven Maybury. 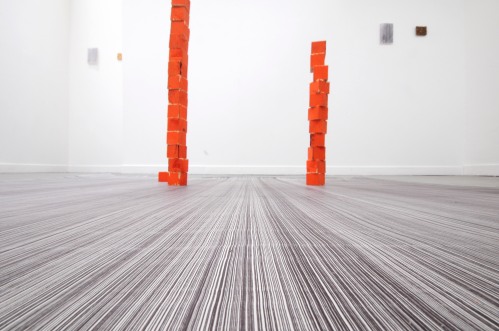 You had three exhibitions recently (‘Jigsaws, Combs and Rulers’ at Eight Gallery, ‘Groove Chronicles’ at Market Studios and ‘Radical Lines’ at Pallas Projects), the first followed immediately by the second, the second overlapping in schedule with the third. What was the reason for this, and can you talk about how the three exhibitions are similar and how they are different?

The first exhibition was actually extended by the gallery it was in, allowing the three shows to be overlapped for 3 days, which was really nice.

This work wasn’t supposed to be shown in three exhibitions, but shortly before the production of the work, it started to realise itself in three forms. At this point, it allowed me to think about more than one resolution to a project and how that can create a dialogue between the work. I ended up using three different gallery spaces in the city and resolving the communication of the works through the three different spaces.

The shows were choreographed so that you didn’t have to see them all to understand the work, but instead they would give you a deeper understanding of my work and practice. It was great that they overlapped at one point as visitors were able to experience the shows one after another. Walking from one gallery to the next allowed time for reflection. Each show shared an aesthetic quality by virtue of being made by the same artist, but at the same time, I experimented with materials, mediums and platforms that were unique to each show. This enabled interesting dialogue. All of the work for the exhibitions were formed and produced together in the my studio. So they grew and lived and communicated directly with each other for a while. The process of separating the works into the three shows became fundamental. I thought I had defined the works and exhibitions, but much changed to my surprise and It was this process that really defined the communication of the work. I learned a lot and really loved this process. Nothing is concrete until you have that beer in your hand at the exhibition opening.

One thing that the exhibitions share is an interest in the process of recording, and records as artefacts. Why are you interested in them?

I am very interested in the idea of change, and constant change at that. I approach the idea of things evolving and changing by examining scientific ideologies on energy transformation. In my work, I often like to take control and almost re-code these artefacts and objects myself, basically making interventions. I oversimplify the process of change and I challenge the form of objects through complex re-evaluations.

For the three shows, I mostly used found objects like combs and rulers that I would find on the street. I was finding combs with missing teeth and rulers with broken edges – expired objects it seemed. I used this stumble upon approach as a process of seeing and began collecting such objects. When I manipulate or re-code the form of an object, it causes a drastic change in its narrative. But I like to have a physical record of the previous form of the object, in order to create a direct visual link when displayed next to its re-contextualised form. When I use objects as rulers and draw from them, this allows me to create an identity or representation of objects by creating a record of its current state as well as embedding that current state into the re-coding of the new form. This can be seen in the ink residue that remains on the objects after they have been transformed.

What is your method of working? Do you keep a schedule or do you work sporadically?

When there’s work to be made, I make it. I work a lot and like to produce a lot. But I don’t confine work only to the studio. I stroll around the streets, stare at walls, use on the internet, see shows or meet up with peers – these are all part of my method of working, so I’d say my work is more of a lifestyle. I never feel like I switch off.

Do you have any rituals that you practice in the studio before/while/after working?

I don’t know. I’ll have to get someone to watch my process to tell me – maybe I do. I listen to records while I work. I read an interview with the painter Michael Borremans recently and he has these mad little rituals, like putting vodka in his coffee in the morning for an extra kick, and cracking open some nice wine or champagne when he finishes a piece to celebrate…and something about wearing a tie, I think. It just makes me like him even more, but I don’t think I’ve picked up any rituals myself…yet.

You teach photography and take your own photographs. What interests you about the medium?

Photography for me has always been a process. I take a lot of photographs but I don’t really exhibit my photography. I use photographs as a tool, as reference points. There is something about its distance from the subjects that I like and dislike. Photographs help me think, but I need to be physically making and manipulating things.

You curate the book selection at PhotoIreland and The Library Project. How did this come about?

As I mentioned, I’m very interested in the photograph and what it can do. Two years ago, I started an internship with The Library Project and PhotoIreland, and I haven’t left yet! It’s a very enjoyable project to be involved with. PhotoIreland is a very important festival, one of my favourite festivals in Ireland, and to be working with it is incredibly rewarding.

What do you think of the current state of the photobook?

I’m a huge fan of photobooks, but with its recent popularity it has become a formula or recipe for photographers to make work. Some feel that they must have a book and a show, even though their work requires neither. Having said that, the nature of the photograph lends itself well to the book format. I’m curious to see how long the popularity of photobooks will last, since we’re seeing a lot of e-photobooks. coming out.

You are also a founder and an editor of ESC, a visual art and literary zine. Why did you start it, and what are your aims with this publication?

ESC is a zine format publication created in late 2011 by myself, artist Aine Belton, and my cousin, Jessica Maybury. It was an experimental platform for literature and art to not only co-exist, but to collaborate. We originally started ESC as an output for our own work, and for ideas that never had an outlet, but it has grown to include a number of artists and writers from around the world, as regular contributors – which is amazing. I think its modest format is what makes it so accessible. Working in ESC is really fun and exciting. It’s also one of those projects where the process is key. We make zines, exhibitions, field recordings, lots of online stuff, documentaries, short videos, and we are currently in the process of making our first book.

What excites you about the zines being produced in Ireland, and how do they compare elsewhere?

I love the modesty of the zine format. It doesn’t ascribe to any rules or formats and there fore I think it can become a platform for anything. The other day I picked up a zine on bikes in Dublin called “Fellow”. I thought this was great. It was printed on newsprint. It’s a growing scene in Ireland, which is great, with zine fairs and exhibitions and even launches – which is a new thing for zines. People are really getting into self-publishing more and more. Maybe it’s reaction to the Internet, I’m not sure. But zines have a bit more of a following elsewhere. In Europe for instance, The Netherlands, Germany and France host some amazing zine libraries, archives and festivals! That’s something we’re looking into in The Library Project. Zines are an affordable and sometimes more accessible method of publishing for photographers and artists.

Which contemporary artists should we keep our eyes on?

If I had to name someone, I’d mention the Swiss duo, Nico Krebs and Taiyo Onorato. I love what they’re doing. I’m also enjoying watching what collectives are doing, like Basic Space in Dublin.

I’m really interested in curators and what they’re doing. It’s really only a new profession that has expanded outside of museum studies in the last decade or so. I think this area will inform artists and their work heavily – especially how we view works of art.

Are you working on any upcoming projects?

I am indeed. Keeping very busy! I’m showing in Tulca Galway this November, which I’m very excited about. I’m also working towards a show or two next year. I am also involved with a few experimental curatorial projects, one of which will include a road trip! ESC has a few tricks up its sleeve. I’ll also continue to work with The Library Project.

All images courtesy of the artist.