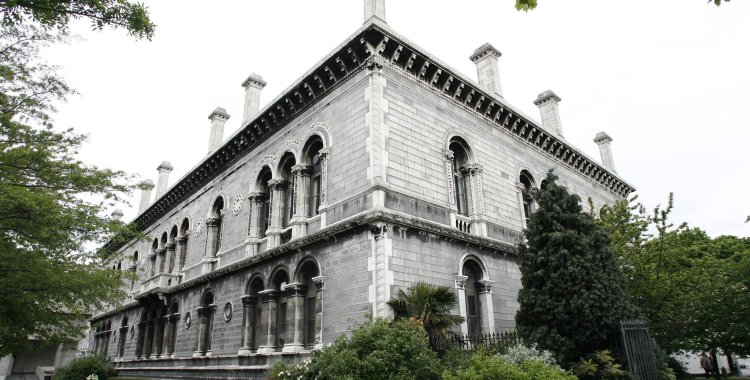 Anyone walking through Trinity Colleges’ campus in the past year would have been confronted by scaffolding and workmen carefully cleaning the façade of Dublin’s most important example of Gothic revival architecture: the Museum Building. This project as well as many others in Dublin has led not only myself but also others I am sure, to become more aware of the deterioration of important architecture, sculpture and archives in our city. In, Wound With a Tear, Clinton and Moriarty’s off-site project on Trinity College’s campus, the pair created a self-guided tour through the grounds using texts, installations and photographs to guide viewers through the college in a new and intriguing way. The texts and works laid out by the pair for the viewer carefully and mysteriously raise questions of the deterioration of the college campus; playing with the idea of Trinity’s lasting reputation as a historical landmark.

“The project, lasting one week only (Monday August 18th- Saturday August 23rd), encouraged visitors to Trinity College to stop into the Douglas Hyde Gallery, collect a map and the following texts to carefully guide and launch followers into an exploration of the campus.”

Following these instructions, I did just that. The tour started at Fellow’s Square. The first thing that struck me was the painstakingly clear directions: ‘Descend 10 steps and continue straight’ and so on. There was no room for error in this exploration, which was in itself mysterious. The text given was made up mostly of interdepartmental memorandums between the Department of Geological Science and the Old Library. The letters were dated between the 18th and 23rd of August, the same dates as the duration of the project. This again added mystery to the tour, as it was unclear whether these letters between the departments were ‘made up’ or were actual correspondences postdated to suit the project. Along with the lack of explanation for the letters, the artists created a cryptic feel to the tour, as it was completely up to the viewer to take from the tour what they wanted and to create their own understanding from the texts and installations around the campus. 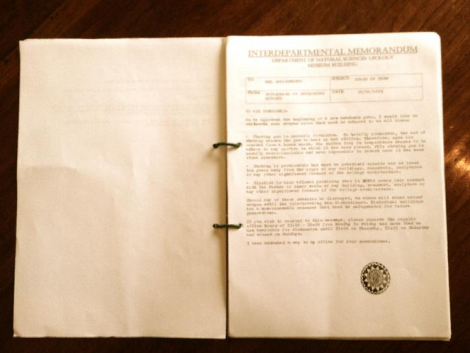 The guide for ‘Wound Without a Tear’

As I followed the guide around Trinity, I was caught by the humorous nature of the tour. The light-hearted correspondence shown in the texts between the departments in the university was comical, but at the same time standing within these monumental buildings, such as the Old Library, and reading about the deterioration of the campus, Clinton and Moriarty managed to create an almost melancholy feel to the tour. The question: what is to be done about the deterioration of the campus, was clear through the work, but due to the comical nature of the tour, it made me question if this is really a problem at all, or just nature and life in action. To what extent should we attempt to preserve? Will this preservation ruin the actual function of the pieces we are trying to save, rendering them useless? Is it contrary to human nature to try to stop things from aging eventually? What does this mean for an institution like Trinity College, an obvious historical landmark? These are some of the questions that came to me, after exploring the campus in this light.

While I am sure the artists intended people to create their own questions, I also believe it is intentional that there are no clear answers. This clever off-site adventure encouraged me to look at my campus in a whole new light, and allowed me to discover both depth and lightheartedness at the same time. While the problem of deterioration is around us continually, especially in a city like Dublin, I believe it has never been highlighted in the unique way that, Wound Without a Tear, chose to portray the issue. The title also shows the juxtaposition of decay and lightheartedness – a very unusual stance that leaves the participant no other choice but to continue to reflect on the subject. I very much enjoyed taking part in the project, and like the thought that the experience of the tour is entirely subjective, so that each individual person taking part most likely had a different interpretation of what the artists were implying. This to me is the true meaning of art – the individual interpretation, the mystery behind the work, and the many unanswered but intriguing questions.