From left to right: Townhouses in Amsterdam, the Berlin Philharmonie, Manchester Cathedral.

One of my favourite ways to immerse myself in a new and unfamiliar city is by delving into its artistic side. Art and architecture reveal the heritage and history that shape a city. They shed light on the people living, breathing and experiencing everyday life around them. I find it so fascinating and satisfying to see a city through their eyes, and through the cityscape that punctures the sky is so many different and exciting ways. Amsterdam, Berlin and Manchester are three cities all packed full of art and culture – as well as being student-budget friendly.

Amsterdam is one of those cities that will keep you coming back for more (whether that’s for the art or the stroopwafels). If you want to see what makes this one of the most modern and liberal cities in Europe, then a visit to the Stedelijk Museum is a must. It is home to a modern and contemporary art collection unlike any other, with innovatory artists such as Kazimir Malevich, Wassily Kandinsky, Ernst Ludwig Kirchner, Henri Matisse, Jackson Pollock, Andy Warhol, and of course Piet Mondrian who was at the forefront of the De Stijl movement. The Rijksmuseum and the Vincent van Gogh museum also present wonderful highlights of Dutch and contemporary art.

Amsterdam is brimming with curiosities and sometimes going off the beaten track can offer some real gems.

The Oedekerk is another artsy treasure that offers a fresh experience by linking the old Amsterdam with the new.  This beautiful medieval church now functions as a phenomenal exhibition space for contemporary artists. The wide open space creates a magnificent atmosphere and enhances the experience of art on display.

Without really knowing what to expect, I ventured to see the Chanel store on P.C. Hooftstraat. Unfortunately I didn’t have the cash to splash inside, but the view from outside was absolutely stunning. The Dutch architectural company MVRDV undertook work on the façade to create something magical. Glass bricks, held together by transparent glue, make up the ground floor and rise up before fading into red brick. The architects in Amsterdam seem to be concerned with retaining these features of the past, as demonstrated by De Hallen. This centre of culture was formerly a service station for trams. The buildings retain the wide open spaces and soaring roofs, allowing light to flood into a multitude of artists’ studios

Amsterdam Noord can be found on the outskirts of the city, but boast an equally impressive home to the 22 storey A’DAM Toren and the futuristic EYE Filmmuseum. One of my favourite adventures was to the renovated warehouses, including the Lasloods, once used for ship manufacturing. These massive spaces have been gradually taken over by artist’s studios and quirky craft workshops. It is the perfect place to explore the hidden artistic treasures, maybe even meeting Dutch artists at work.

Berlin is blossoming in terms of tourism thanks to its incredible cityscape of the Brandenburg Gate, fernsehturm and the Reichstag dome.

The history of this city is set into the very foundations, and Berlin’s public art does not shy away from the atrocities caused by war.

The Holocaust Memorial is an especially poignant site and well worth a visit. 2,711 blocks of concrete are arranged in a grid and represent the millions of Jewish lives that were lost during the Holocaust. As one ventures through, the ground slopes down and the slabs grow in height, submerging you in the weighty concrete surroundings. This is one of the starker examples of artistic creation in Berlin that insists on remembering the chilling history of the city. Of course, the Berlin Wall may provide momentary relief with the brightly coloured art facing out onto western border. Truly iconic works by artists such as Dmitri Vrubel are not to be missed!

Another destination in Berlin that is keen on preserving history is the Gemaldegalerie with its impressive collection of 13-18th century European paintings. For those who are interested in brushing up on their knowledge of Durer, Jan van Eyck, Raphael, Botticelli, Titian, Caravaggio, Rembrandt, and Vermeer to name a few, then this is the place to be! 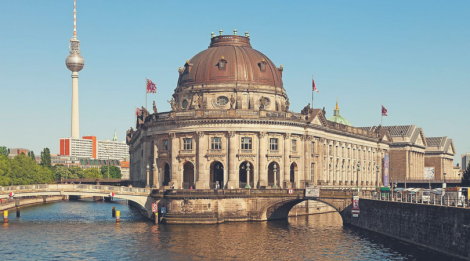 Another museum that should be on the artistic bucket list is the Pergamon Museum located on the stunning Museum Island along with five other museums. One of the highlights is this classical antique exhibition is the (reconstructed) Pergamon Altar. The reassembled frieze of Gigantomachy depicts a mythological battle between the Olympian gods and the Giants. Unfortunately the exhibit is undergoing remodelling and set to reopen its doors in 2019/2020. Meanwhile the Ishtar Gate of Babylon present a gorgeous blue enamelled wall with gold decorative lions and dragons. This is a monumental structure that will strike awe into anyone that views it in the flesh.

One last piece of architecture that truly stands out in the cityscape is the Berliner Philharmonie. This concert hall is famed for its golden-yellow appearance, and sometimes reminds me of a futuristic Lego house with its studded walls that puncture the sky.

Most people associate Manchester as a city of football and indie tunes, however this industrial city has a thriving art scene within the city waiting to be discovered.

Manchester Cathedral has been through the wars, quite literally! It was badly damaged during the Manchester Blitz in 1940 but thankfully it was later restored. The cathedral itself is home to a number of beautiful stained glass windows and intricate wooden carvings that are not to be missed! The immense interior is awe inspiring, and if you needs to sit down to take it all in, you can choose from of thirty carved misericords (decorated seats) which date back to the 16th-century.

The Victorian style Manchester Town Hall is the ceremonial headquarters of Manchester City Council and is thought to be one of the finest Gothic Revival structures. Located nearby is the Manchester Art Gallery which displays some brilliant exhibitions, including impressionist portraits of the city by artists such as Pierre Adolphe Valette. The gallery also caters for families and those wishing to express their inner artist with free workshops, tours and events throughout the week.

The John Ryland’s Library is a stunning haven for any bibliophile and may even rival that of the Long Room in Trinity College. The interior features fascinating stonework, beautiful timber panels and two enormous stained glass windows.  and bookshelves store over 250,000 printed volumes and over one million manuscripts. This neo-Gothic treasure trove was set up by Ryland’s wife after his death as a gift to the citizen of Manchester and incorporates the thirst for knowledge with a beautiful Neo-Gothic aesthetic. 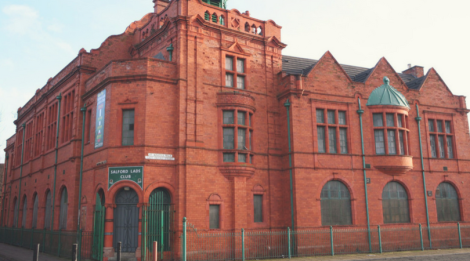 I cannot help but mention the Salford Lads’ Club which may be more of a cult icon for some. However the building itself, located on (the real) Coronation street has a rich history as a youth club which was set up to combat gangland crime. This quirky structure, with its red brick walls and ionic adorned entrance, is over 100 years old! If you are lucky, you may be invited inside to learn more about its tough durability in an ever-changing cityscape.

Manchester Craft & Design Centre, located in the city’s Northern Quarter, proves that art is very much alive and well. With over 18 studios dedicated to textiles, jewellery, ceramics, prints, fine art, this is the perfect spot to explore the contemporary art scene.

These cities offer countless opportunities to really explore and lose yourself in the art and architecture. Some of the places mentioned are tourist must-sees, others are discovered by accident. Both present art and their surroundings in a new light which is exactly what you want when immersing yourself in the history and culture of a new city!